A blog about cloud computing and development
About me

The source on GitHub.

After spending far too much time wondering which of the tasks in my long list of Ansible tasks were slow, I decided to do something about it. In the pursuit of automating everything, I've constructed a large collection of playbooks, complete with their own dependencies, to do just about anything that needs to be done for my web service stacks. Where I used to grow tired of waiting on compilers, I now find myself waiting on development stacks deploying to AWS - a large part of that time being the Ansible process. Rather than guess which tasks were slow, I set out to write a simple plugin that would print how long each task took to complete.

I found out that writing an Ansible plugin is almost too easy (see the docs if you don't believe me). There are several plugin types, but the useful one for this exercise is the callback plugin type, which allows you to define functions to be called when certain events occur.

The core of the plugin is a class, called CallbackModule. After defining the class, you add a method to the class that is invoked at the start of each task.

This is just the stub of the implementation. Unfortunately, there is no corresponding on_task_stop callback - I checked, so I have to measure the task running time in an indirect way. But because the tasks run in order, note that when a task begins that the previous task has necessarily ended, so I can reset the clock when that happens. At the end of the playbook, Ansible prints the results, and also fires a playbook_on_stats event which makes a convenient place for the stats to print.

Now I know which tasks are slow, so I'm off to profile those in more detail.

You are about to run out of excuses for not having multi-factor authentication enabled for your servers.While it's not a security silver bullet, it is a great way to make it more difficult for an attacker to gain access to your system. Other people can more eloquently make the case for multi-factor authentication. I am going to show you how to get it working using Ansible.

Don't worry, you don't have to implement your own. Duo Security offers multi-factor authentication as a service, using either text messages, phone calls, or push notifications (supporting both Android and iOS devices). The best part is that for small organizations it's free! Provided here is everything you need to get Duo Security SSH integration working on Ubuntu 12.04.

The entire playbook is on GitHub: https://github.com/jlafon/ansible-duo-security.

Now, when I log in and choose option 1, I get a push notification on my iPhone that looks like this: 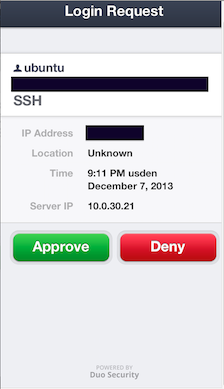 I use Ansible to configure my instances on EC2. I often needto include passwords, SSL keys, and other sensitive data that doesn't belong in source control. AWS allows you to include user-data when launching an instance. You can include arguments to your instance in the user-data field (as JSON for example), or you can include a script to bootstrap the instance - but not both. Since I use Ansible to configure an instance from scratch, I use a user-data script to install Ansible.

Additionally, I have to abuse Ansible to use it in my workflow. Ansible is easy to dive in to, butone of the first things you do is define an Inventory, which is basically a list of hosts to be managed with Ansible.

Great, right? No. This is a problem for me because I never knowthe IPs of machines I plan on configuring beforehand, because they are all provisioned on demand ( I don't want to manage my instances centrally anyway). Ansible includes an EC2 Inventory script which claims to solve this, but really just introduces more problems. One big problem, is that Ansible queries information about instances many times when running a playbook, so many times in fact that the EC2 inventory script has to include a cache that stores instance information locally in a file. The documentation actually recommends a cron job to refresh the cache. Now, complexity has been added and we no longer get current information about instances. We can do better than this.

I almost gave up on Ansible at this point, but then I discovered Pull mode playbook, which is a shortcut for cloning a git repository of playbooks and executing one whose name matches <server-name>.yml or local.yml. This is a step in the right direction, but there are still a couple of problems with this approach. I either have to make a <instance-ip>.yml file for every instance I create in my playbook repository, or I create a separate repository for every type of instance witha local.yml in it - in which case I don't get to reuse any of my Ansible code.

It turns out that you can run a playbook locally:

Now we are getting somewhere. What I need now is a way to stage and retrieve my playbooks, and passin to the instance which playbook it should use.

How it all works

Starting from the beginning, I use git for my source control. I need to stage my application code so that the application can retrieve it later. You might be tempted to use GitHub, but don't. GitHub is a great service, but it does go down from time to time. Instead, use S3. I use private GitHub repositories for my source code, but I mirror them in S3. Here is how to do it with Fabric.

I also keep my Ansible playbooks in a git repository, so I can use the same code above to stage my playbooks.

The variable ansible_bootstrap_src is the a script provided as user-data to the instance, and is usedto install Ansible and execute a playbook. I have written it in Python, so that I can inject variables into it.

Now I can provided URLs to the script from Python. But, I can also provide other environmentvariables, such as my Django SECRET_KEY.

Finally, we can combine our bootstrap script with our variables:

At the end of my Ansible playbook, my application is started in the same environmentas the playbook - so that the environment variables it needs are present.

The approach above works fine for passwords, string keys and such - but what about files? To begin with, I store them in private S3 buckets. One easy way to give bucket access to an EC2 Instance is through IAM Roles. I don't want to provide persistent access to my private bucket however, I just wantto give the instance access long enough to provide access to what it needs on startup.Luckily, S3 has a mechanism for pre-signing URLs which included a timeout. This allows you to generate a URL that can be passed to the instance on startup, but will expire.

Using this workflow, you can provision stacks with CloudFormation (without writing any JSON by hand), have all the instances in them self configure, and provide them with sensitive data. Additionally, you aren't relying on any services outside of AWS.